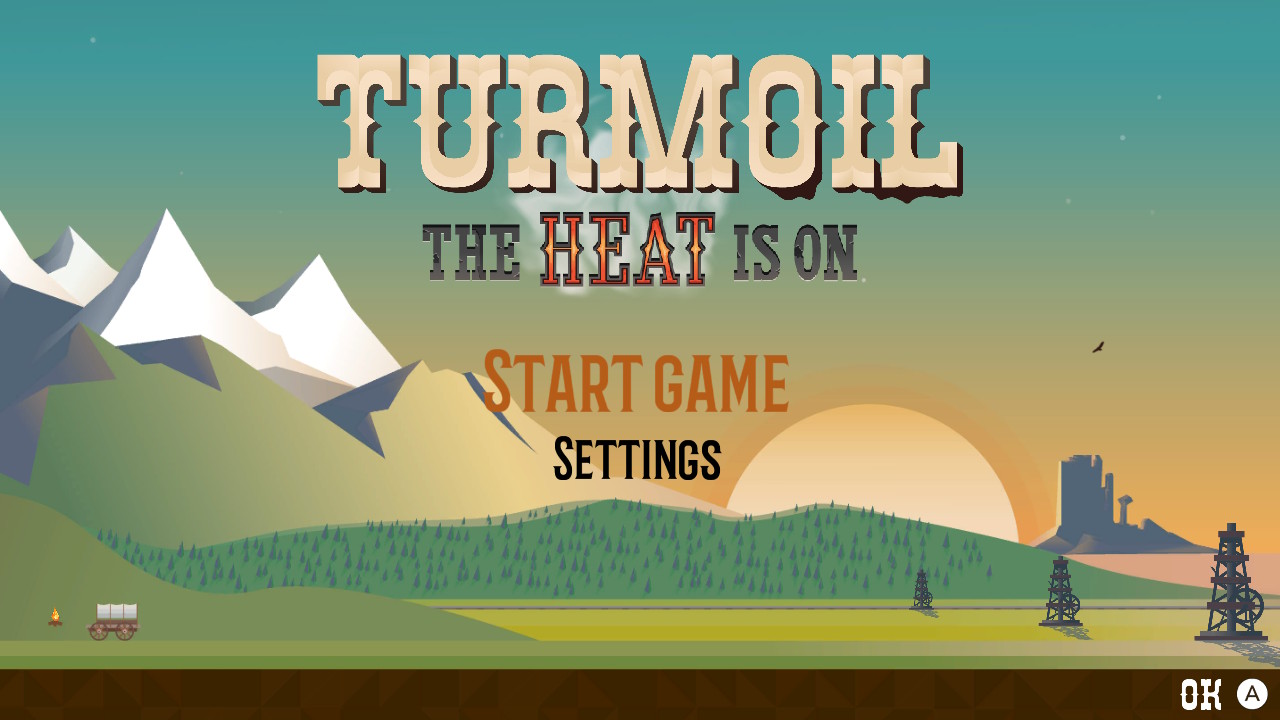 The switch version comes with the DLC included called “the heat is on”. Nice! 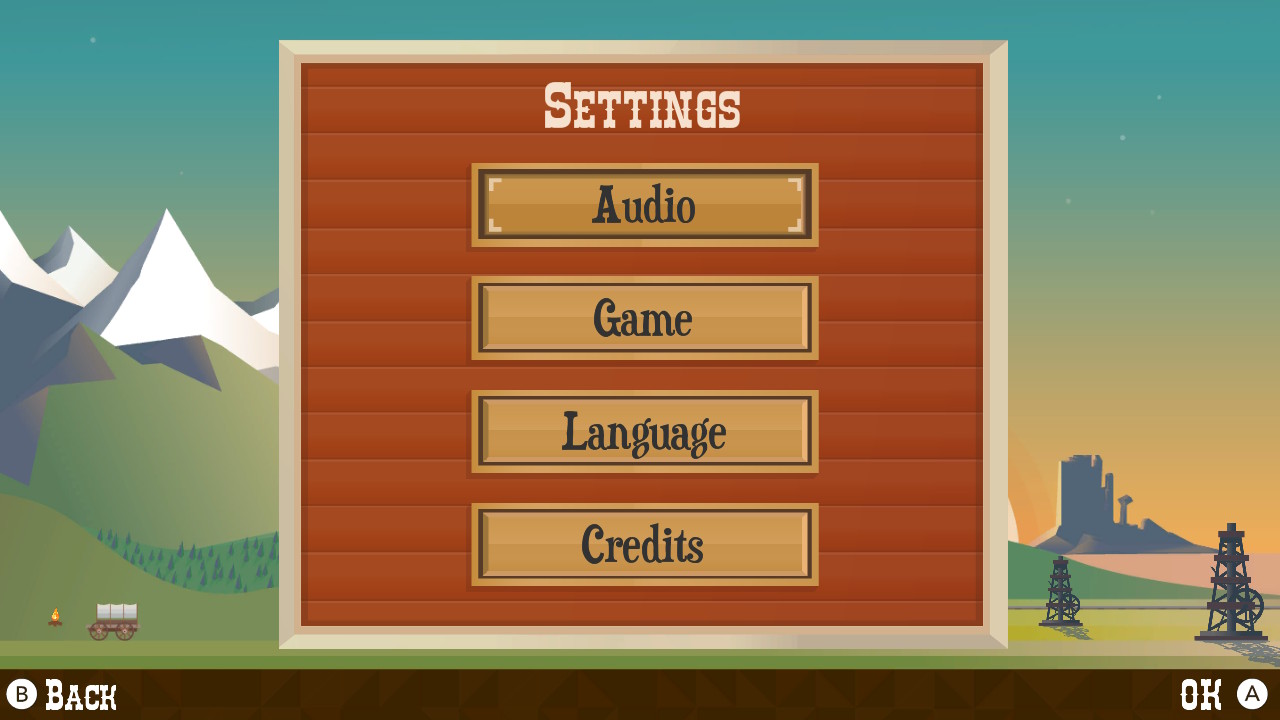 The game has lots of options in the settings, from audio options to game options and languages. I thought it was smart to use flags as universally understood language selections.

The final option in the menu is Credits. People put a lot of time and effort into making these games, so its nice to be able to see who and what they did. 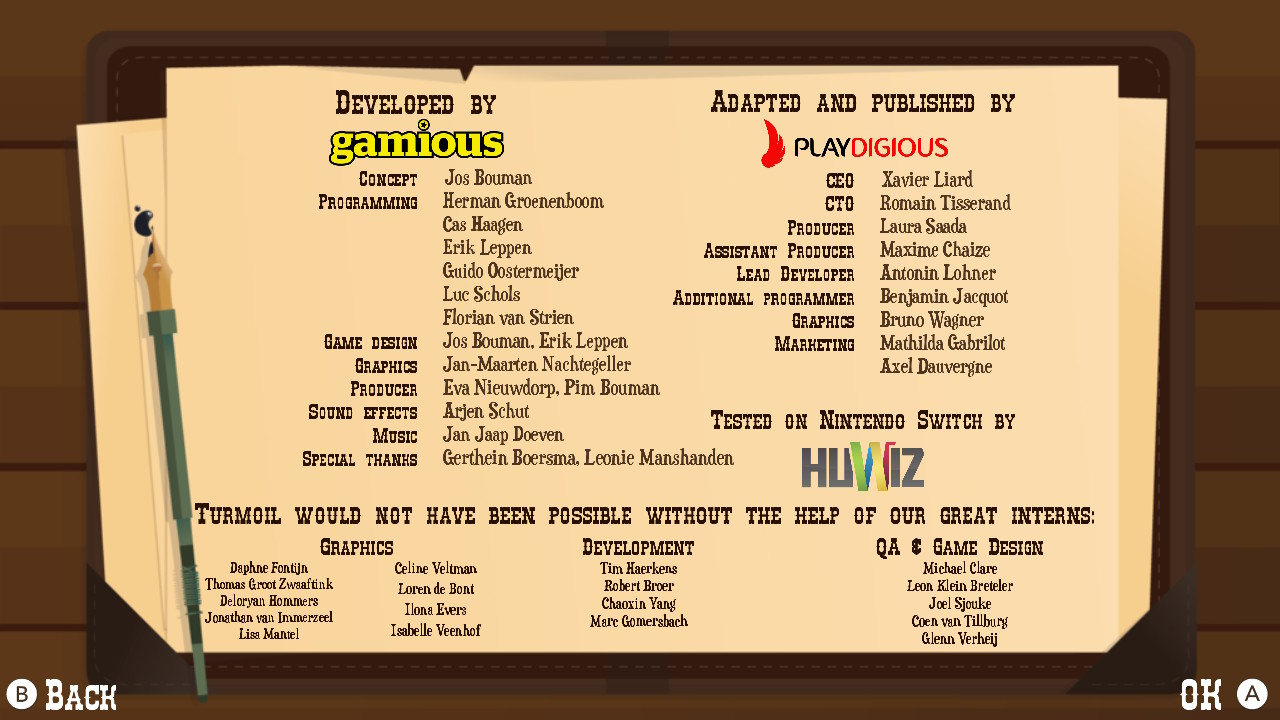 There is a few game modes. You can choose “start new campaign”, or “single game”. I started a full game campaign. 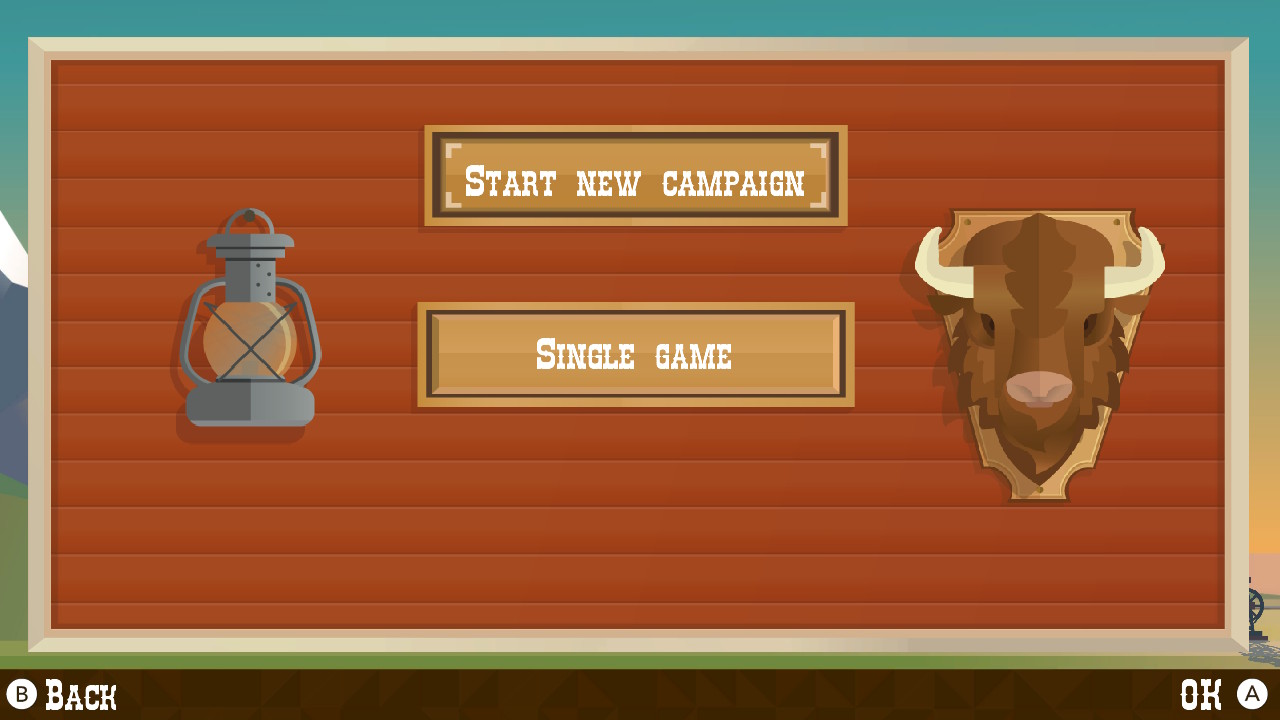 Then you have a choice to play the base game “Turmoil” or the DLC expansion “The Heat is On” (included in the switch game). I played the base game Turmoil. 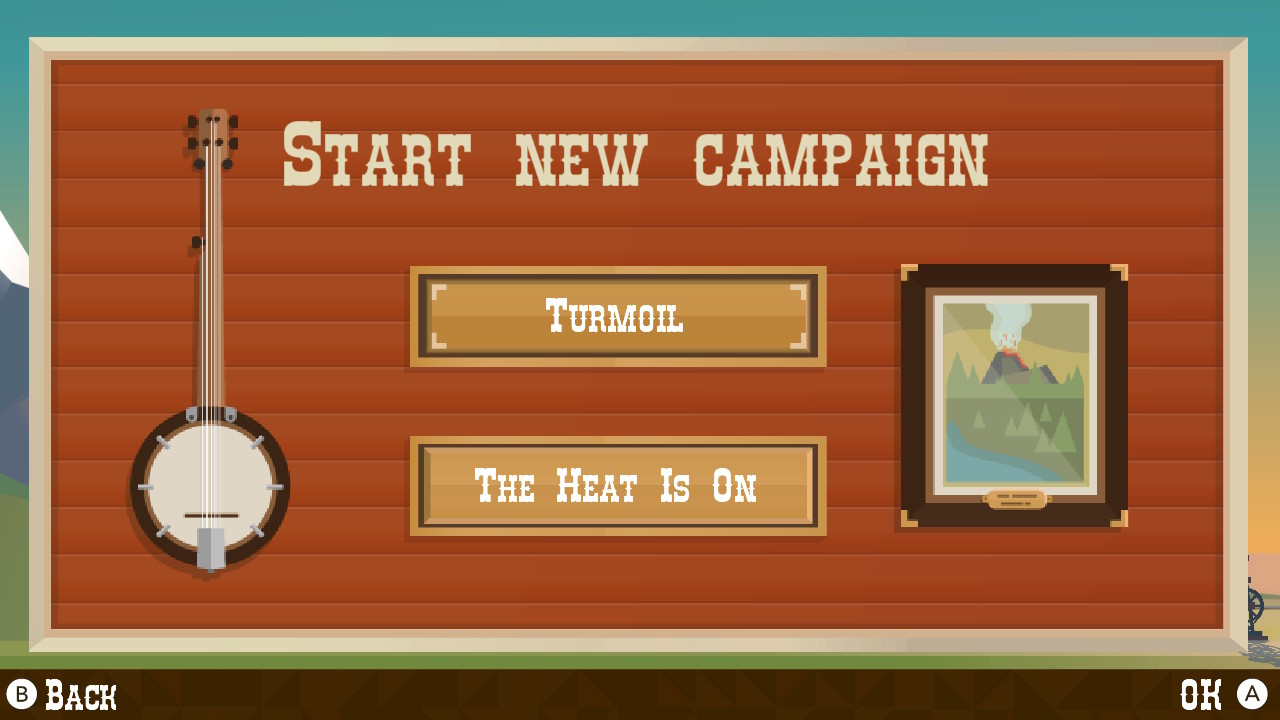 There is a choice of 4 different characters to play as. 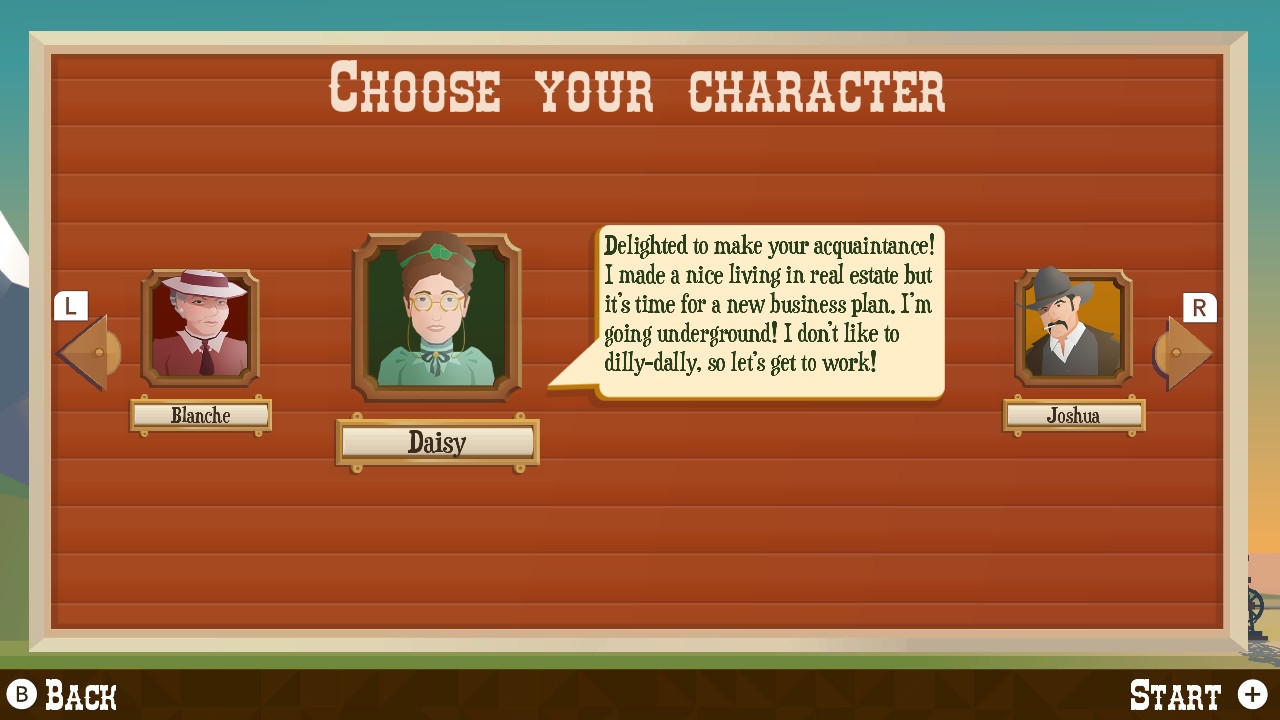 Each character has something to say before you select them.

The tutorial is short and sweet. Shows how to find oil using a dowser, put the pump, and use a wagon to get the oil from the pump to the store.

The next level teaches you about oil storage tanks, and how the price of oil changes. You can control when to put oil in your tank, or sell it to the store.

The controls are easy to use. You use the Left analog stick like a mouse pointer for placing objects and selecting menus, or you can use the D pad to select the tools at the top. You can also use the touch screen. The L and R buttons tell your oil wagon which store to sell to.

Each level is time based, starting out with shorter levels, and moving into an entire year per level later on.

After the 3rd level it now has 2 stores you can sell to, the left and the right side. You have to watch the prices of the 2 stores and tell your wagons which store to sell to. Higher prices are what you are after. You use the L and R buttons to control where to sell to. 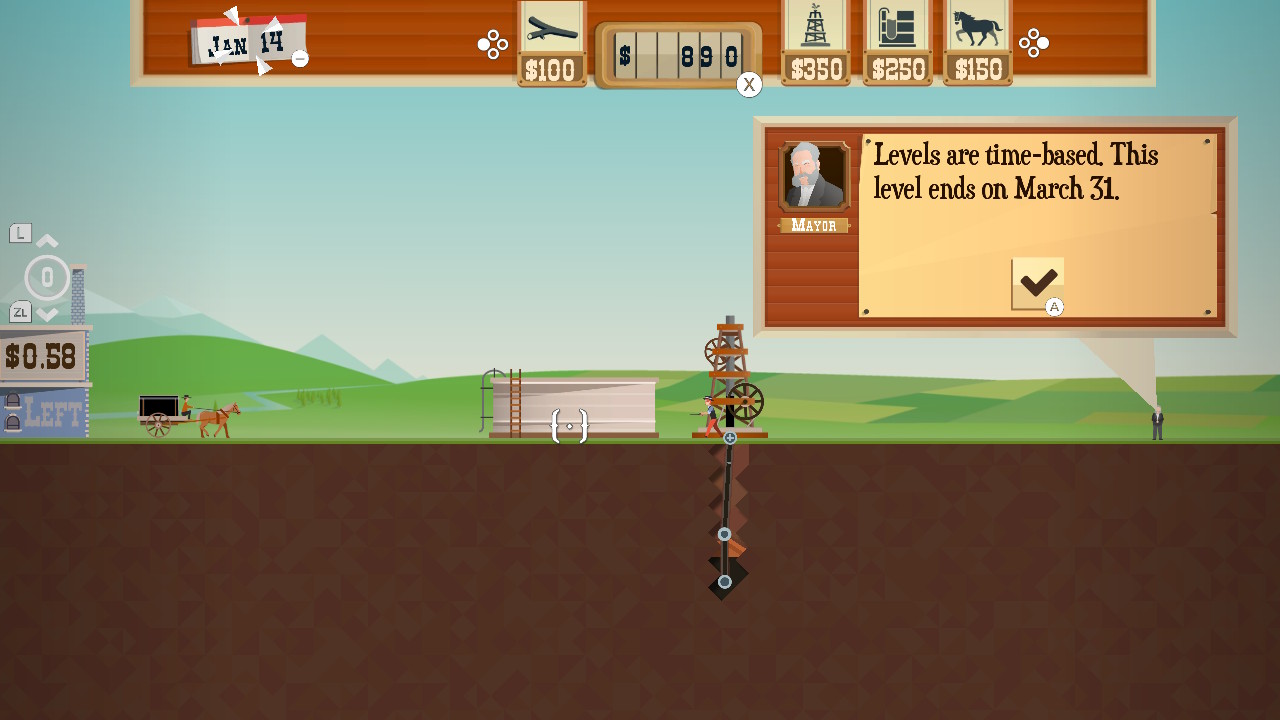 Each level so far has been unlocking more buildings in the town. There is a Workshop, Bank, Factory, and Town Hall. The Town Hall is where you buy land to mine from. The Factory and Workshop sell equipment to make you more efficient at mining oil. The bank can loan you money, with interest. 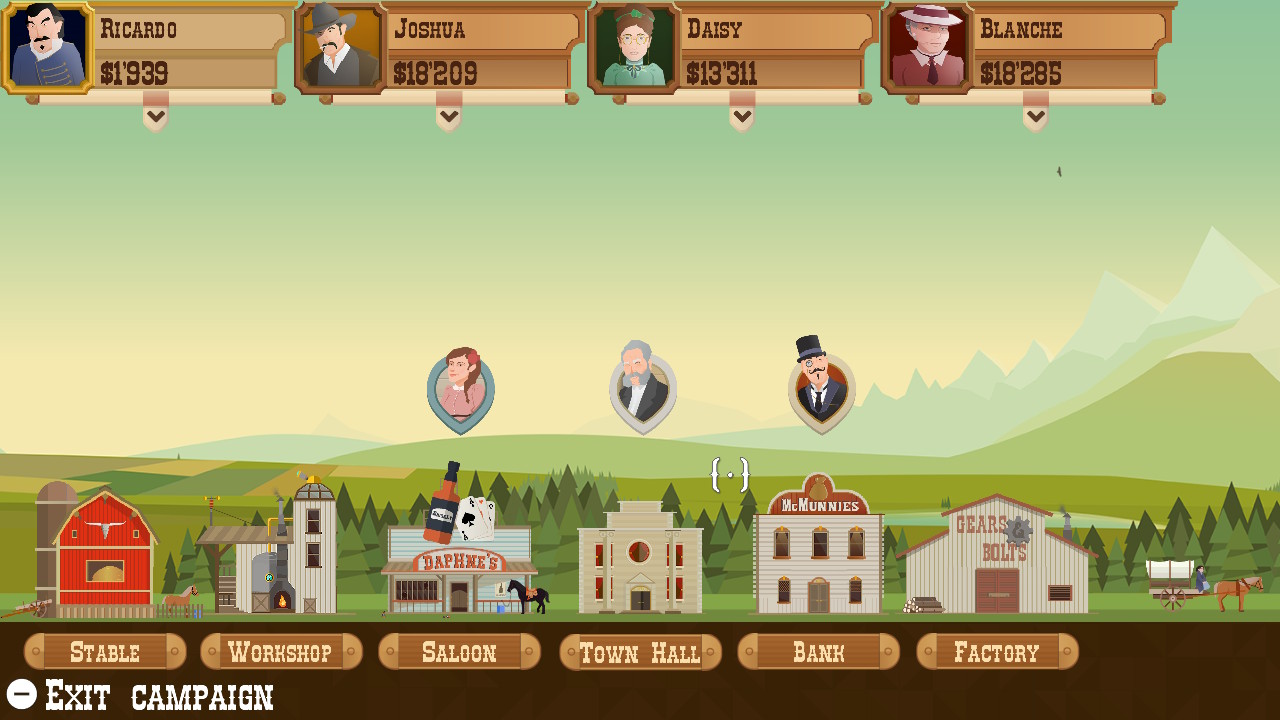 After the 4th level adds a stable where you can upgrade the horses and wagons.

At this point in the game, I needed a loan from the bank just to have the $2,000 startup costs. I am not very good at the game because its my first time, but I am getting a hold of the concept and how to play.

At this point in the game you have access to a saloon in town. This is where you can do backdoor deals to get lower interest, or keep oil cost above a certain number. 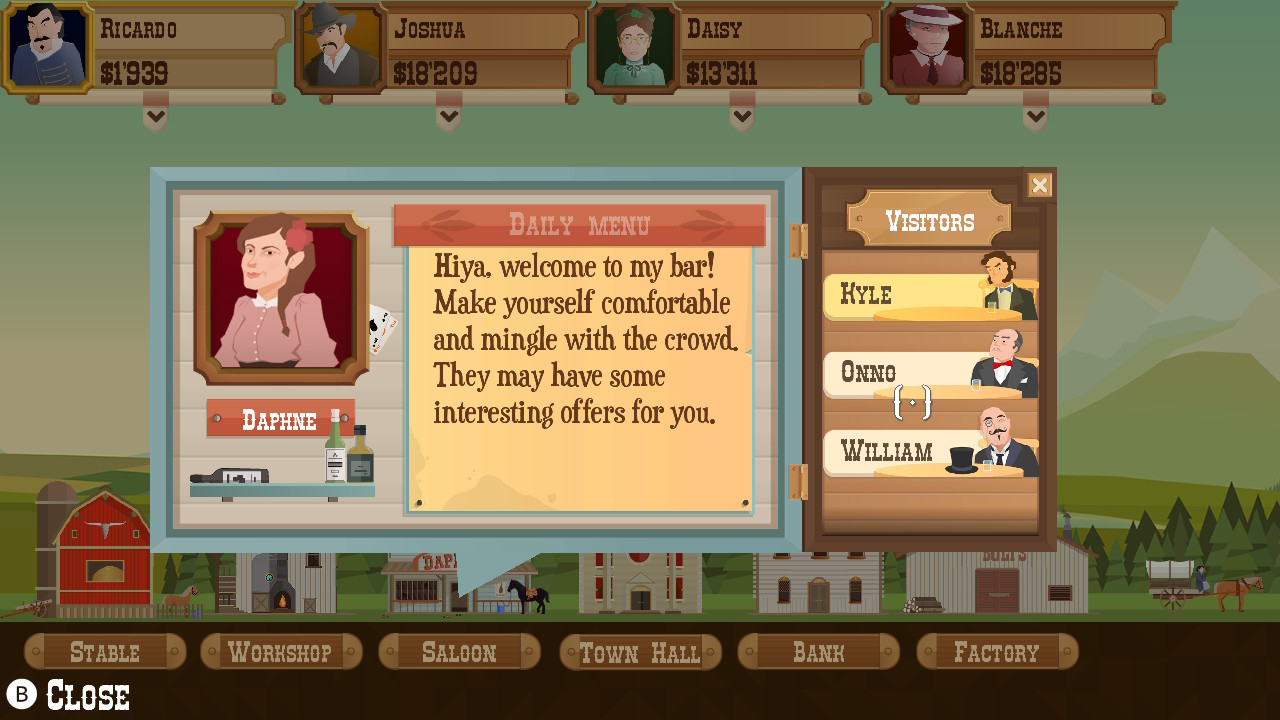 I figured it might be better to have more wagons than oil rigs, so I kept about 1-2 more wagons than rigs and did not have any spill over. I also started the level with 3 of the oil finding people with the rods (Dowser). I figured I can not make any money unless I find the oil asap. When a rig would run out of oil, I would zig zag the pipe until I found another oil pocket under ground. It cost more but was faster than relying only on the dowser. (Later on I would rely on dowser, sonar, and gophers more) 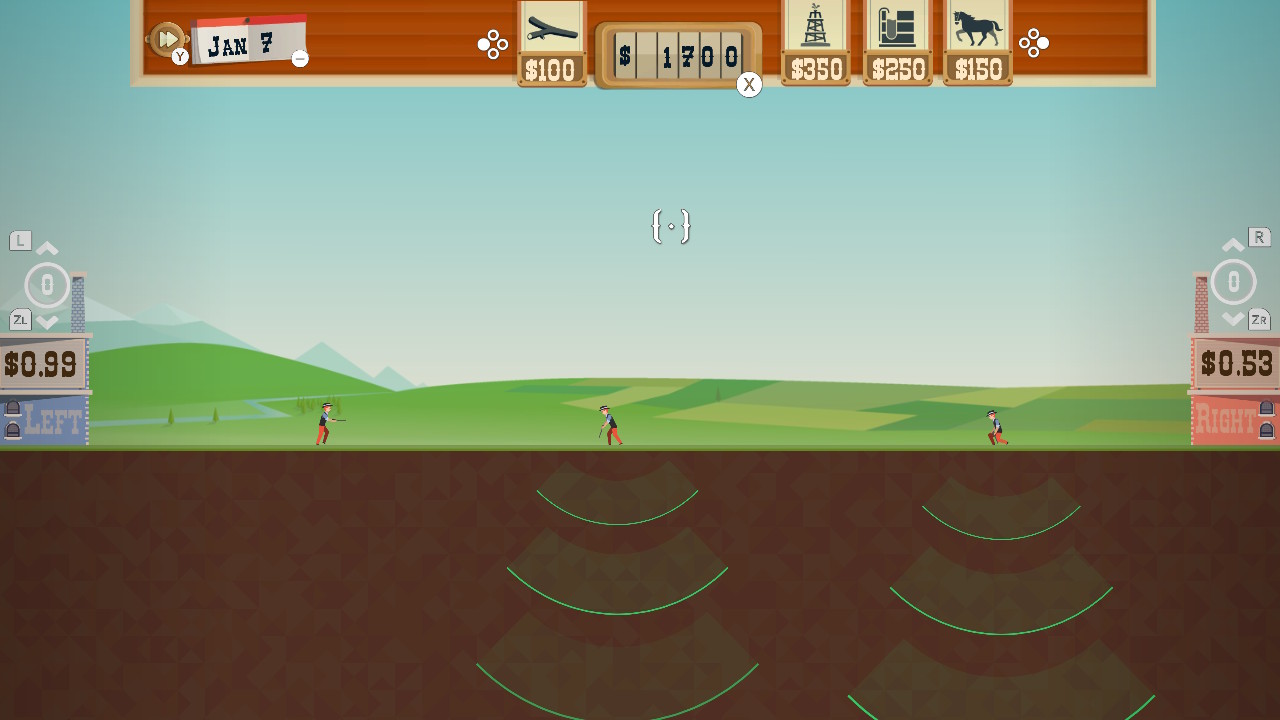 The map was almost all used up digging for oil and I thought the game would end, but the next level brought a new map that’s in the desert and you can also dig for diamonds and rocks. Later on there are a total of 4 land areas, each with unique items to find such as diamonds in the desert and pockets of gas.

The levels are mostly trying to find oil hidden underground. Sometimes its easy to find them. Later on there are rocks in the way, and pockets of gas. There are also Diamonds you can find, but need a trained gopher to get them for you. 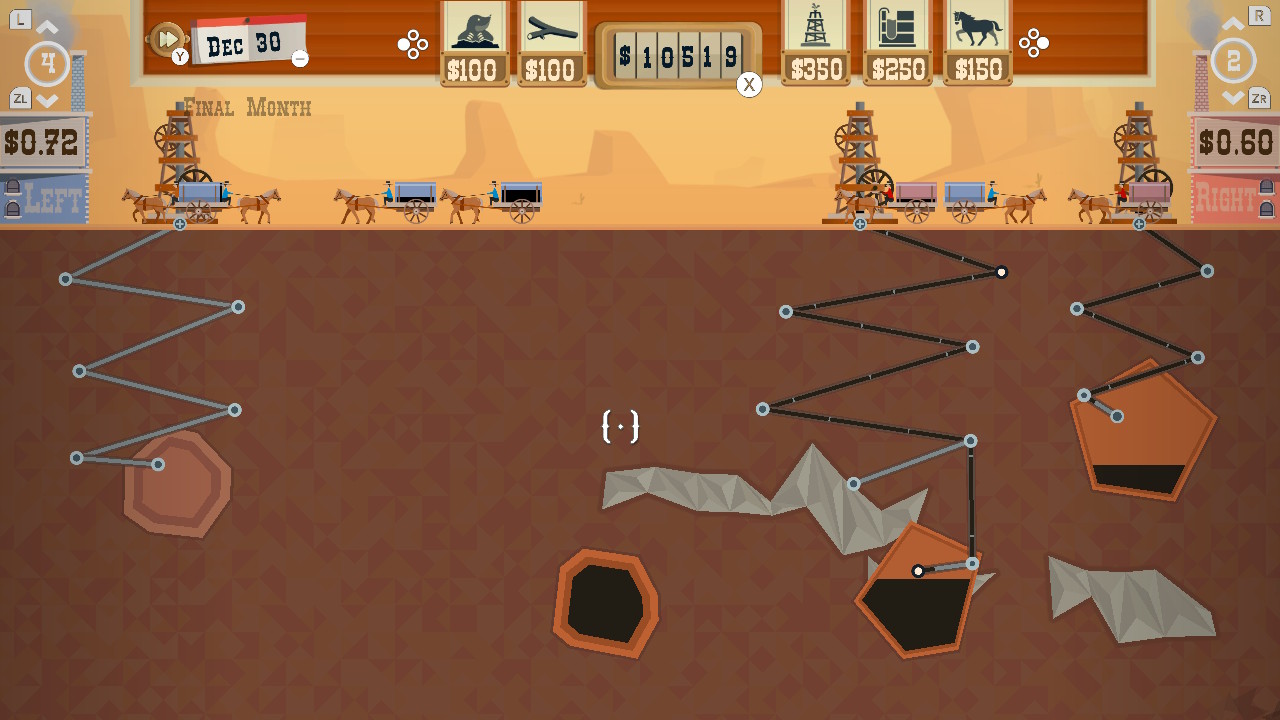 When the level ends, it removes the ground blocking the view so you can see what you got and what you missed. In this picture you can see the rocks that block access, and one oil pocket I missed.

After several more levels, the mayor will be leaving the town and you can bid on a 2% share of the city. 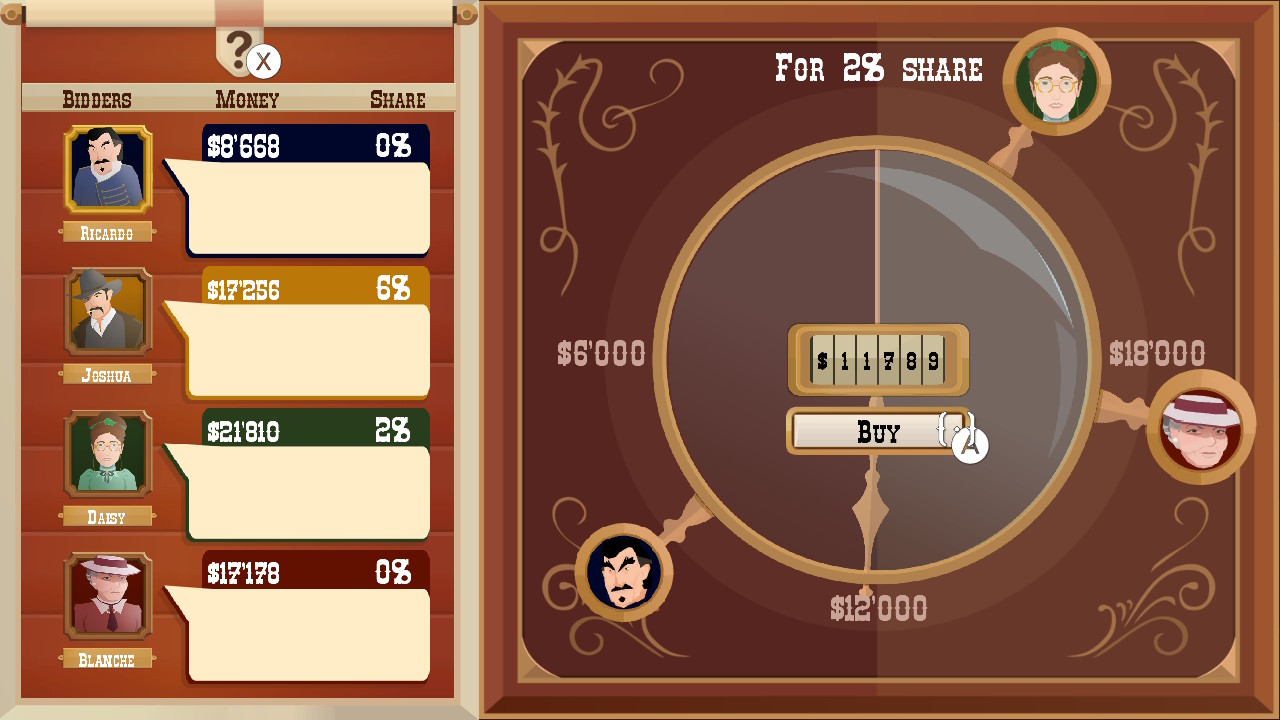 I mainly used this function to take money away from the AI players, they seem to bid around 10k, but increases as the game gets closer to the end. (I was wrong to not bid)

The more I play, the more new things that add to the game play. It’s quite interesting to see what’s next.

After each level, you get a chart showing how much money each player made (Myself and the 3 AI players) 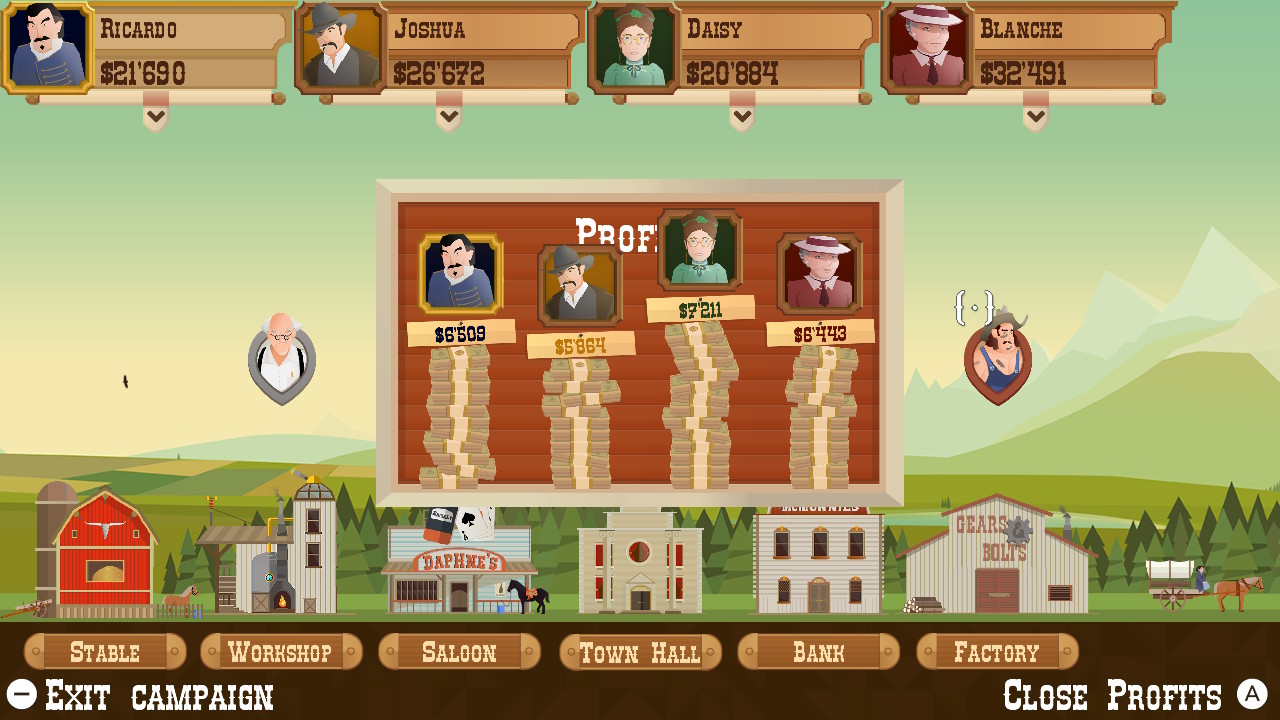 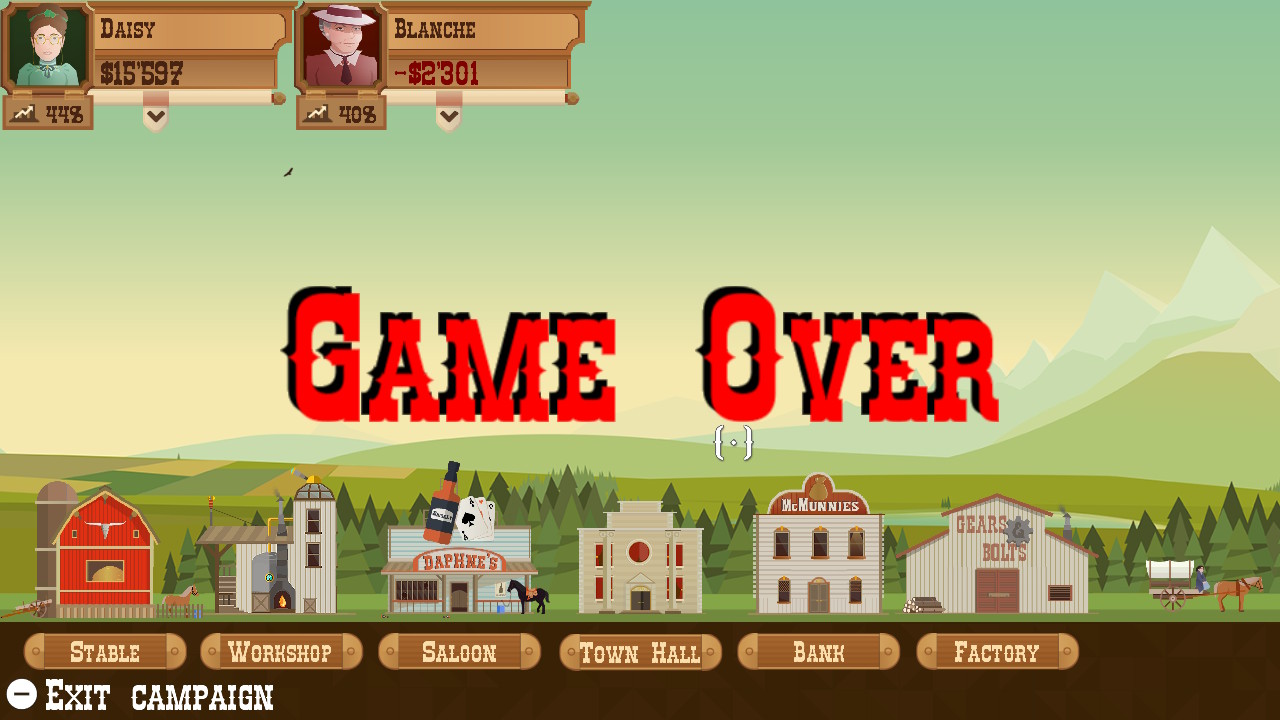 Turns out my strategy for letting the other AI players getting the stocks in the city was a bad move, as the lowest % player gets booted! I have 0%. I was spending my money on upgrades like bigger wagons, faster dowser, gofers, etc. I ended up loosing, but enjoyed playing for 4 days in my free time. Seems like I played several hours before the end of the game. This game has lots of replay value. I’m sure I will keep playing this game.

My conclusion: The game is a fun game with short levels, great for on the go fun. Try and beat your record of how much you can make. There are a lot of youtube videos about people trying to get tons of money or finding all the oil. Its very interesting to watch and see other people’s strategies. After playing for a while, I finally started to be able to profit more than the AI players. It’s a challenge to be able to find all the oil without going bankrupt. With the bidding to be mayor and paying for upgrades, its a delicate balance to keep from going bankrupt and will keep me coming back for more.

Special thanks to PLAYDIGIOUS and Gamious for the opportunity to review this game. Check out Turmoil on the Nintendo eshop!